Hurricane Energy plc, the UK based oil and gas company focused on hydrocarbon resources in naturally fractured basement reservoirs, provides its 2021 interim report and half-year results for the six-month period ended 30 June 2021, and an update on Lancaster field operations and net cash balances as of 30 September 2021.

Antony Maris, Chief Executive Officer of Hurricane, commented:
"The first six months of 2021 have proved very challenging. The focus has been on exploring ways to provide a stable financial platform for the Company, whilst in parallel delivering production as safely and efficiently as possible from Lancaster. Recent stronger oil prices combined with the impact of the bond buyback, internal cost cutting, and other cost reduction measures, has brought the possibility of bridging the funding gap for the repayment of the bonds within reach. However, the challenge of funding investment in our assets remains.

Going forward our near-term priority remains the repayment of our convertible bonds, and as such we move into the second half of the year with an overarching focus on capital discipline and operational performance. We are optimistic that, despite the economic and operational uncertainties that exist, even if a shortfall remains it may be possible to find a solution to repay the bond in full at maturity.

We continue to engage with all our key stakeholders regarding our financing arrangements as we concentrate on removing the debt burden as well as extracting further value from Lancaster and our other discoveries." 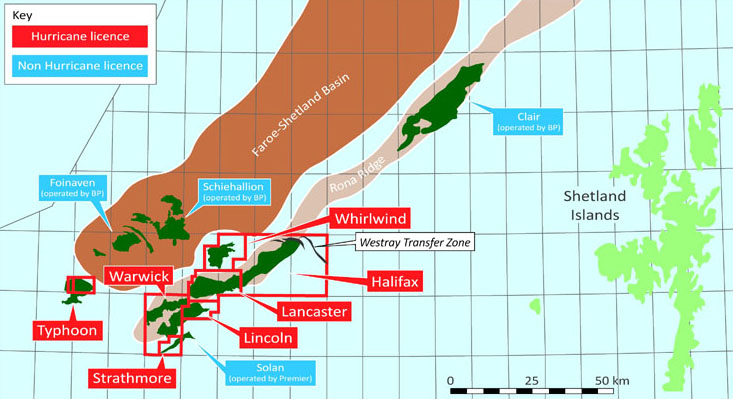 Greater Lancaster Area ("GLA")
Operationally, the first half of 2021 was focused on managing production from the Company's Lancaster field to maximise output via the Aoka Mizu FPSO whilst also mitigating the impact of water cut and pressure decline in the main producing well. This approach resulted in an average production rate of 11,100 bopd for the period versus 14,600 bopd in the first six months of 2020, reflecting the decline in reservoir pressure and increasing water cut.

Post period-end, in July 2021, the FPSO underwent a planned maintenance shutdown which was completed safely with production restarting in a timely manner. As previously noted, the production rate immediately following the completion of the annual shutdown was elevated leading to the average oil rate for August being higher than in previous months, however, current oil production performance has returned to that seen just prior to the shutdown.

The 25th cargo of Lancaster oil, totalling approximately 530 Mbbls, was lifted on 9 October 2021. The next cargo is expected to be lifted in late-November to early-December 2021.

In June 2021, the Company received approval of the Lancaster Field Development Plan Addendum (the "FDPA") by the OGA. The FDPA approval, together with associated production, flare, and vent consents, enables production with the bottom hole flowing pressure up to 300 psi below the bubble point pressure of the fluid (1,605 psia at 1,240 metres TVDSS), subject to the Company ensuring that no incremental liberated gas is produced to surface.

The initial consent was for a three-month period from 16 June 2021 to 15 September 2021. Subsequent production, flare, and vent consents have been received for the current period and future consents will be issued on an ongoing three-monthly basis subject to compliance with the terms of the FDPA. As noted in the Company's announcement post-period end on 29 September 2021, based on current trends, management estimates that bottom hole flowing pressure in the Lancaster reservoir may reach the bubble point by the end of Q1 2022.  As previously announced, there is a degree of uncertainty regarding the timing and the full impact of this.

As announced in June 2021, the Company resolved not to exercise its option to extend the bareboat charter of the Aoka Mizu FPSO as it deemed it not to be in the best interest of the Company or its stakeholders. The current initial three-year term is due to expire in June 2022. Hurricane remains in positive negotiations with Bluewater Energy Services B.V., the owner of the Aoka Mizu FPSO, with regards to an alternative extension for a shorter period than three years that would allow production to continue beyond June 2022.

Greater Warwick Area ("GWA")
The GWA JV (Hurricane 50%, Spirit Energy 50%) has spent the first half of 2021 reassessing its understanding of the GWA licence potential. Efforts have focused on evaluating the basement and the Mesozoic potential over the licence. The GWA JV is looking at all options on pathways for further appraisal and routes to the possible development of resources on the licence including through the addition of a third partner.

Owing to the disruption caused by the COVID-19 pandemic, an agreement was reached with the OGA to extend the deadline for the GWA licence commitment well from 31 December 2020 to 30 June 2022. The GWA JV is now engaging with the OGA on the technical re-evaluation and interpretation of the area to seek an appropriate timeframe for this commitment. If the GWA JV does not achieve an adjusted timeframe, it is likely that the Company will have to engage with Spirit on options to remove this obligation including a mutual surrender of the P1368(S) licence sub area.

Post period-end, in July 2021, Hurricane completed the plug and abandonment of the 205/26b-14 ("Lincoln-14") well, which Hurricane operates on behalf of the GWA JV. Hurricane contracted the Stena Don semi-submersible rig with the operation completed within both schedule and budget. The GWA JV had a regulatory obligation to plug and abandon the Lincoln-14 well by 31 October 2021, and this obligation has therefore now been fulfilled.