Staatsolie has announced Suriname’s first Shallow Offshore (SHO) Bid Round, with website live and registration open from 16th November 2020. The Bid Round encompasses eight blocks covering some 13,524 km² of the coastal waters of western Suriname immediately to the south of the significant string of deepwater discoveries and to the north of the billion barrel in-place onshore oil fields. 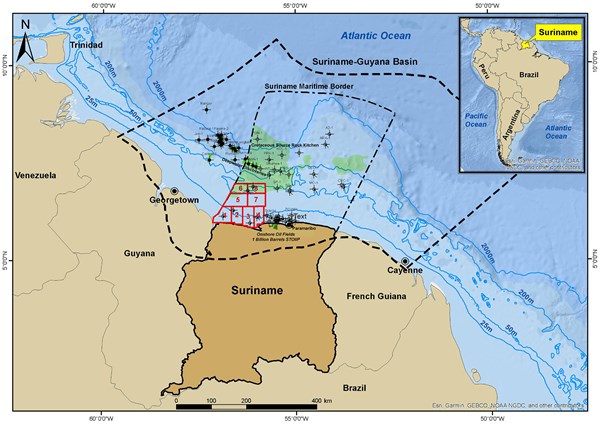 Staatsolie is now inviting qualified international and national oil companies to bid for one or more of the blocks on offer, based on a minimum work programme obligation to acquire 3D seismic in the initial exploration term, followed by drilling in subsequent terms. A 60% interest and operatorship is available in each block, where Staatsolie will be carried through all exploration for its retained 40% equity.

The shallow offshore acreage on offer is located in the migration pathway immediately updip from the mature Cenomanian–Turonian source kitchen which charged the fairway containing the Apache/Total Maka Central, Sapakara West and Kwaskwasi discoveries and where the Apache/Total Keskesi East and Shell/Petronas Sloanea wells are currently drilling. Significantly, the oil being produced from the existing Tambaredjo, Tambaredjo North-West and Calcutta oil fields onshore Suriname has also been typed to the Cenomanian–Turonian source rock, so realistically can only have migrated through the largely undrilled shallow water acreage being offered. Additional Cretaceous and Jurassic sourced oils have also been typed in the onshore wells, demonstrating that the basin has multiple mature source intervals.

Other than a small 3D survey on the shelf edge, the SHO Bid Round area is covered by a sparse grid of 2D seismic data and has seen only six historical wells drilled, and is thus considered underexplored, although all wells encountered hydrocarbons. One of them, AKT-1, encountered 205m of shows in the Santonian equivalent to the deepwater discoveries, overlying another 87m of shows in the Albian.

Staatsolie’s most recent evaluation has defined numerous stratigraphic and structural prospects over the SHO Bid Round acreage. These are not penetrated by the existing wells, offering large single and stacked play potential. High quality 3D seismic is now needed in order to unlock the full potential and define suitable drilling locations.

The Virtual Data Rooms will open on 30th November 2020 until mid-March 2021, with bids due by 30th April 2021. For more information visit the Staatsolie website or contact ENVOI Limited in London, which has been commissioned as A&D advisor for the Bid Round.