The Norwegian Ministry of Petroleum and Energy has announced the 25th licensing round on the Norwegian Continental Shelf. 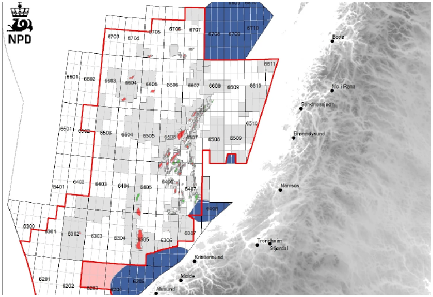 Map of acreage available for application in the Norwegian Sea in 25th licensing round (Source: NPD)

The licensing round includes a total of nine areas, eight in the Barents Sea and one in the Norwegian Sea.

"Around 200 000 people are employed directly or indirectly in the petroleum sector in Norway. New discoveries are necessary to ensure continued activity, ripple effects, employment and governmental revenues throughout the country. Implementation of the 25th licensing round is line with the Granavolden-platform and Norwegian Parliament policy," says Minister of Petroleum and Energy, Ms. Tina Bru.

The overall objective of the Government's petroleum policy is to provide a predictable framework for the profitable production of oil and gas in the long term. Its is important to explore all opened areas on the NCS, including the frontier areas made available in numbered licensing rounds.

"The numbered licensing rounds are a supplement to the APA rounds, an is important to the Norwegian Government's resource management. Regular rounds secure prospective acreage to the industry and can result in discoveries that maintain future employment and revenues," says Minister Tina Bru.

The aim is to award new production licenses in the announced areas in the second quarter of 2021. The application deadline for companies is 23 February 2021 at 12 p.m.