Over the past week Transocean confirmed contract extensions for two of its drillships operating offshore Brazil with Petrobras. Meanwhile, Seadrill, Sapura, Maersk Drilling and Vantage Drilling also secured more work for their fleets. 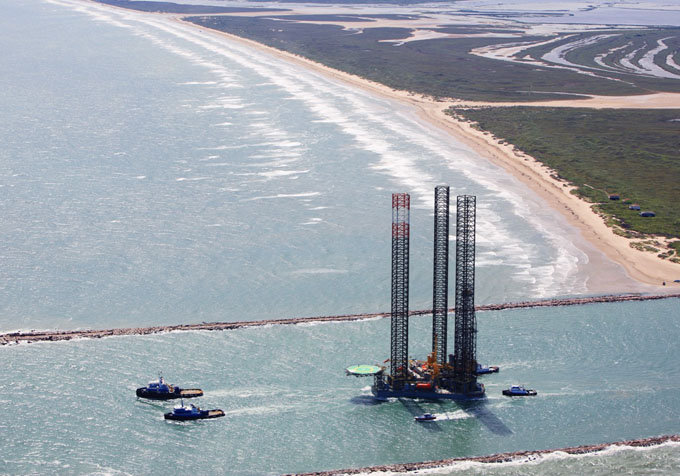 Brunei Shell Petroleum Company Sdn. Bhd. (BSP) has exercised the option to add one deepwater exploration well to the work scope of the 7th generation drillship Maersk Viking. The contract extension has an estimated duration of 35 days, with work expected to commence in May 2021 in direct continuation of the rig’s previously agreed work scope. The contract value of the extension is approximately USD 7.1 million, including additional services provided.

Sapura Drilling Holdings Limited has been awarded a contract by Total Exploration and Production Congo for the provision of its tender assist rig Sapura Berani. The scope of the contract covers drilling of three wells offshore Congo, commencing in Q4 2021 for a period of three months. The contract provides for an option of one further well. The rig recently arrived at the Namdock yard in Walvis Bay, Namibia, from Malaysia and will now undergo some yard work.

Neptune Energy's four-well drilling campaign at the UK Seagull field development, using jackup Valaris JU-249 is now scheduled to commence in January 2021. The drill, which was originally scheduled to begin in August 2020, will keep the rig busy into Q2 2022.

BW Energy says that it has delayed its drilling campaign at the Gabon Tortue field from early 2021 to mid-2021. The company will utilize Borr jackup Norve for drilling of its DTM-7H development well.

Maersk Drilling has agreed with Noble Energy to amend the previously announced contract for the drilling of one well offshore Colombia in 2020 using ultra-deepwater drillship Maersk Valiant. The well will not be drilled in 2020, and Maersk Drilling will receive compensation in the form of a deferral fee and also retains an exclusive option with Noble Energy to drill the well in 2021, should the operator decide to drill it.

Total Angola has released Seadrill ultra-deepwater drillship West Gemini from its obligations under the contract. Seadrill is entitled to compensation in the form of a lump sum fee. The rig had been due to continue working with the operator until March 2021 but activities were suspended in April. Additonally, jackup AOD I was suspended from operations by Saudi Aramco in September for three months at a discounted dayrate.

Equinor has declared additional optional wells on its contract for harsh-environment semisub West Hercules in Norway adding $26 million in backlog. The additional term will keep the rig working until June 2021, with options remaining that could see it committed into June 2022.

Lundin has completed drilling of its Polmak wildcat well (7221/4–1), which was drilled in the Norwegian Barents Sea using Seadrill-managed harsh-environment semisub West Bollsta. The well found indications of hydrocarbons across nine metres of internal poor-quality reservoir but was nonetheless considered dry. The Polmak prospect is situated in PL609 and PL1027. The West Bollsta will now move on to Lundin-operated PL533B to drill the Bask prospect, which has been given gross unrisked prospective resources of 250 million barrels of oil.

MOL Norge has received consent from the Norwegian authorities to drill its Eidsvoll exploration well (2/9–6 S) in PL 617 using jackup Maersk Integrator. Work is scheduled to commence over the next month.

ExxonMobil has made another oil discovery off Guyana, at the Tanager-1 well within the Kaieteur Block, however, the discovery is reported as non-commercial. The well was drilled using ultra-deepwater drillship Stena Carron, which is committed to the operator until July 2021.

Eni has resumed drilling operations in the US Gulf of Mexico using ultra-deepwater semisub Valaris 8505 after a period of suspension. The rig is now expected to make its planned move to Mexican waters in April 2021 to drill three wells with the same operator before passing over to Lukoil for the new one-well plus one-well option contract also offshore Mexico.

Neptune Energy is planning a two-well drilling program on PL882 offshore Norway, commencing in the first half of 2021, which will include an appraisal well on Dugong and an exploration well targeting the adjacent Tail prospect. The operator has Odfjell Drilling-managed harsh-environment semisub Deepsea Yantai on hire until late 2021 with 10 one-well options also available.

Pemex is scheduled to drill the Saap-1EXP wildcat well offshore Mexico, commencing this month using semisub Blackford Dolphin, which is committed to the operator under a 15-month contract. The well is scheduled to take just under two months to complete. Meanwhile, the operator is also planning to drill the Copali-1EXP well, located off the coast of Veracruz. Drilling is expected to start in late November and last around 71 days.

Maersk Drilling says that onshore modifications to jackup Mærsk Inspirer, which is being retrofitted to work as a combined drilling and production unit at the Yme field offshore Norway, are still scheduled to be completed by the end of 2020, whereafter the rig will move offshore for hook-up and commissioning. The rig will be committed to Repsol until 2026 with a five-year option also available.

Following its cancellation of a drilling contract for ultra-deepwater drillship Valaris DS-9 earlier this year, Premier Oil says that it is now planning to drill the previously planned exploration well, targeting the Berimbau/Maraca prospects in Block 717 offshore Brazil, during 2022.

During its third quarter 2020 financial results call, Vantage Drilling confirmed that it was the lowest bidder with drillship Platinum Explorer on ONGC's two-year India deepwater tender. The new campaign is due to begin in 2021. It is understood that Transocean and Seadrill also submitted bids.

Sources indicate that Petrobras has received priced bids from its tender for provision of up to two deepwater rigs (2,400m of water) for a period of 1,095 days each, starting next year. It is understood that units bid include drillships Norbe IX, Norbe VIII, Deepwater Orion, Valaris DS-9, Valaris DS-16, Dalian Developer, Brava Star, Laguna Star and semisubs Sevan Developer, SSV Catarina, Ocean Valor and SS Amazonia. It is understood that Sevan Developer and SS Amazonia were priced lowest.

Perenco and new license partner, VAALCO, may drill an appraisal well at the Akoum-B discovery in Block DE-8 offshore Gabon next year. Block DE-8 is in shallow waters and encompasses multiple producing fields. The discovery was made in 2003.

Ithaca Energy has applied for consent to develop the Abigail field located 145 miles from the Scottish coastline. The first phase of the project will include re-entry (and completion) of appraisal well 29/10b-8 and phase 2 will include drilling of a new production well and associated tie-in to manifold installed under Phase 1. The estimated duration of offshore activities is 120–130 days for Phase 1 (drilling and pipeline system installation) and 105 days for Phase 2 (drilling and well tie-in).

BW Energy is progressing its Brazilian Maromba project towards the environmental approval and optimisation of the field development plan with respect to investment, operational costs, and schedule. The Field Development Plan was approved by the regulator (ANP) in August and final investment decision is planned by the first quarter of 2022. The Maromba development drill is expected to consist of two wells to be drilled using a moored semisub and is expected to take around 100 days to complete.

In its Q3 trading statement, Maersk Drilling stated that in the North Sea jackup market outside Norway, several new rig requirements have come to the market with commencement in mid-2021 with contract duration ranging from one-well to multi-year. Further, a few requirements outside the North Sea, but with need for high-spec harsh environment rigs, are adding to the demand pipeline for the harsh environment jackups. In the international floater market, requirements are building in Africa, Brazil and South East Asia, with contract duration ranging from one-well to multi-year.

Ultra-deepwater drillship Stena IceMAX is scheduled to leave the dock in the Canary Islands before the end of this month and commence mobilization to the Bahamas for its one-well exploration drilling campaign with Bahamas Petroleum Company. The drill will take 45 to 60 days to complete, with spud scheduled prior to year-end.

Seadrill ultra-deepwater drillship West Saturn has now arrived in Brazil ahead of a new drilling campaign with ExxonMobil. While in Rio de Janeiro, the rig will undergo some minor maintenance as well as procedures with Brazilian authorities and ExxonMobil. The unit will then commence the new drilling campaign starting on Campos and Santos ultra-deepwaters around January 2021. The most likely destination is either the block C-M-789 (owned in partnership with Qatar Petroleum and Petrobras), where they have 7 wells under licensing, or another right next to it, Titã (owned in partnership with Qatar Petroleum), with 5 wells under licensing. Other areas that might be explored afterward are north Campos and the Sergipe-Alagoas Basin, where the company has several ongoing licensing processes with Ibama.

Sources indicate that Borr Drilling jackup Prospector 5 is preparing to soon head offshore the UK to begin work with CNOOC International under a new contract that will keep it busy until Q2 2022.

Maersk Drilling reported revenue for Q3 2020 of $226 million compared with $305 million in the previous quarter, which was negatively impacted by lower utilization and lower average day rates following contract terminations and suspensions received during the first half of the year, and positively impacted by performance bonuses received in the North Sea segment and revenue from recharge of COVID-19 related costs. The company reported revenue backlog of $1.5 billion at 30 September 2020; hereof revenue backlog for 2021 of $646 million.

In its third quarter 2020 trading update, Seadrill provided limited financial information, but stated that its cash position is $851 million. The company's order backlog at September 30, 2020 was approximately $2.1 billion and during the third quarter it had a technical utilization of 94% and economic utilization of 92%.