As bp announces a project aimed at developing industrial-scale renewable hydrogen, the company take a closer look at hydrogen power and explain how it could change the future of hard-to-decarbonize industry.

How could hydrogen help the world to decarbonize?

It’s the small molecule that could play a big role in lowering emissions. Hydrogen is being hailed as crucial in the push to decarbonize the planet. Sounds like magic, but it’s simply science. When hydrogen (H) reacts with oxygen (O), lots of energy is released – and the only other product is water (H2O).

This combination of high energy and zero emissions opens the door to decarbonizing energy-intensive industries that are hard or expensive to electrify:

Why not just use renewables?

Renewable energy has a huge part to play in getting the world to net zero. In particular, renewables will have to play a key role in decarbonizing the power sector – as electricity supply is a big source of emissions globally. That means getting to Paris is going to need more sources of clean energy, even though wind and solar are growing really fast. And over time, hydrogen could also step in:

By 2050, hydrogen could be accounting for around 16% of all the world’s energy needs, according to bp's Energy Outlook. 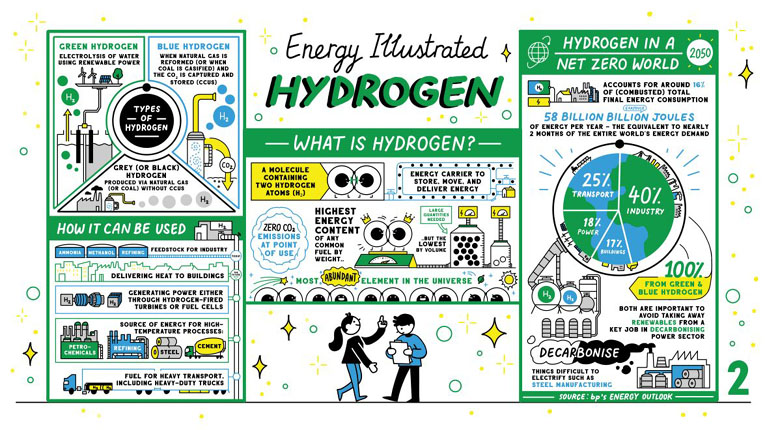 Why isn’t it being used much now?

Mainly because when made into fuel, it currently costs more to produce at scale than other fuels, particularly if you want to make emissions-free green or blue hydrogen.

There are also storage and infrastructure challenges. Hydrogen can be compressed or liquefied, which helps, but cost of production and transportation is an issue. On top of that, some of the technologies needed to use hydrogen are expensive today, such as the fuel cells required to convert hydrogen to electricity in a vehicle.

It is important to ensure the process is safe. Hydrogen is a small molecule, which means we have to be careful about monitoring for leaks. Plus, it ignites easily and has a large flammable range and so, like any fuel source, hydrogen needs to be handled carefully. Companies like bp have been using it in refinery operations for decades, which means we know a lot about it and have developed safe working practices.