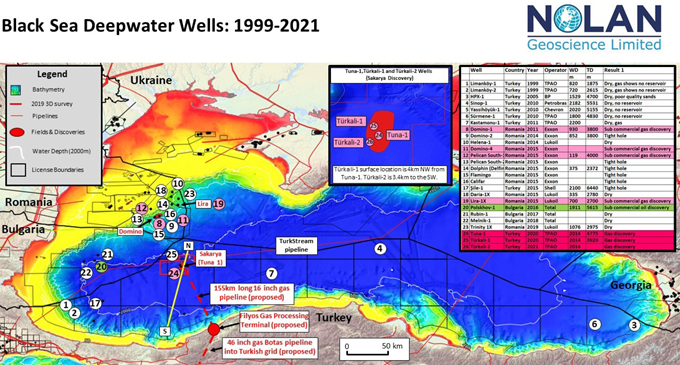 The Sakarya discovery is 170km from the northern Turkish Black Sea coast, in 2014m water depth. It may yet prove to be a significant discovery for Turkey. The Türkali-1 and 2 appraisal wells appear to have been geological successes and production well tests are soon to be underway at both of the wells. The results of these tests may yet confirm Sakarya as a commercial success and a significant play opener with transformational resource potential for Turkey and TPAO.

Hard and fast facts are still thin on the ground. Operator Türkiye Petrolleri Anonim Ortaklığı (TPAO) has not provided any details on reservoir quality, reservoir thickness, reservoir extent or gas composition for discovery well Tuna-1 or appraisal wells Türkali-1 and 2.

A recent article in Turkey's Daily Sabah, an article by Ankara based journalist David O'Byrne for S&P Global and TPAO's Environmental Impact Assessment (EIA), has helped shed light on a potential Sakarya development.

Turkish Petroleum Corporation (TPAO) General Manager Melih Han Bilgin recently provided testimony to Turkey’s Parliament regarding a Sakarya development. Bilgin outlined a direct tie back from the sub-sea manifolds to the coast at Filyos, in the Zonguldak Province, without the need for any offshore platform or processing. Energy minister Fatih Donmez on March 3 told Turkish reporters that TPAO had already acquired a site at Filyos.

The ability to develop the gas without any offshore facilities will depend on the results of production testing, flow assurance studies and what, if any, sand production mitigation measures will be required.

A similar production concept was use at the 1Tcf Corrib gas field offshore Western Ireland, developed by Enterprise Oil and Shell and now operated by Vermilion Energy. The Corrib 'subsea to beach' development was aided by very dry gas and limited sand production issues. Another notable 'subsea to beach' development is the Ormen Lange field, offshore Norway, operated by Shell with a 120km pipeline to the shore/beach. 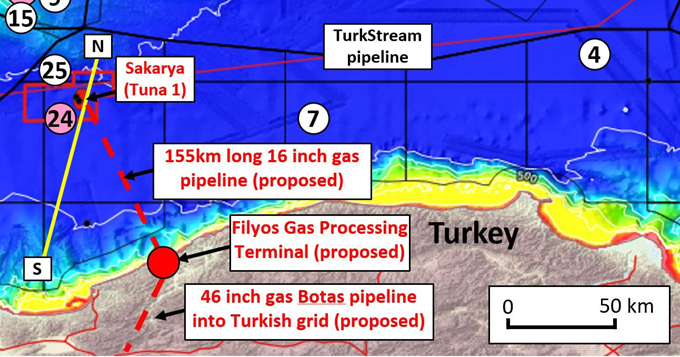 Extensive production well testing of the Türkali-1 and 2 wells is soon to be underway with the Kanuni drillship, another TPAO owned drillship. Fatih will be used to drill another exploration well, Amsara-1 in the same play as Sakarya.

Bilgin confirmed Sakarya to be a significant discovery; 405 Bcm (14.3 Tcf). Initial annual production could start at around 3-4 Bcm/yr, rising to a plateau of around 10 Bcm/yr. Further drilling, would confirm the size of the field. The initial development plan involves 10 wells with a second phase of 30-40 wells to achieve the 10 Bcm/yr plateau depending on the results of further appraisal drilling.

In a previous article, I outlined three possible scenarios for a Sakarya type discovery based on previous Black Sea well results and discoveries. The discovery well (1) encounters gas bearing sands in three units A-C, two of which are within a Miocene four-way closure (see Figure 3 for illustration). The main unit of interest is Unit C (Miocene) with a lowest closing contour of 3500m. 3D seismic interpretation of Unit C reveals a series of moderate (orange) and high (yellow) amplitudes interpreted to be part of a large base of slope fan sand complex. The discovery well establishes high amplitude facies is sand prone, uncertainty in moderate (orange) facies. There is a limited difference between the seismic response for downdip residual gas (water) fill and updip full saturation gas fill.

Three scenarios are considered for the results of appraisal wells 2-4 that result in a significant variation in the estimates for gas in place (GIIP) and recoverable resources (EUR) from 3.6 TCF to 0.25 TCF. See Figures 3 and 4.

The Türkali-1 and 2 appraisal wells appear to have been geological successes and production well test operations are soon to be underway at both of the wells. If successful this suggests Scenario A as the more likely outcome. The well tests may yet confirm Sakarya as a commercial success and a significant play opener with transformational resource potential for Turkey and TPAO.