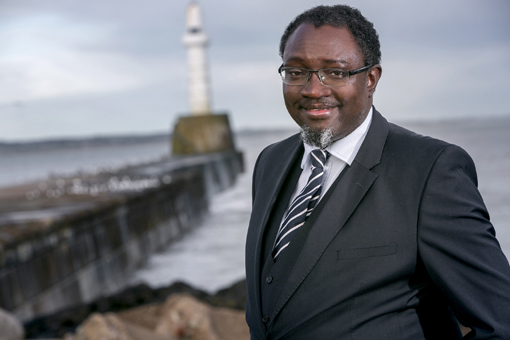 I thought about this quote as I listened to Prof Paul De Leeuw, Director of the RGU Energy Transition Institute, present the findings in the OGUK Diversity and Inclusion Survey Report to a virtual gathering of more than 200 people.

The survey’s findings were a snapshot of how the North Sea workforce feels about diversity and inclusion.

It was the culmination of months of data gathering and analysis. The Oil and Gas Diversity and Inclusion Taskforce had commissioned the survey in November 2020 to establish a baseline for the UK continental shelf. About five months and 1,600 responses later, the results of the first survey of its kind in over half a century of commercial oil and gas operation in the North Sea were in.

As a member of the taskforce and chair of the Scottish arm of AFBE-UK, I was keen to hear what Prof De Leeuw had to say and to understand the implications of the findings, but I was not merely a spectator.

The survey sought to benchmark the UKCS performance by creating an index which consisted of factors such as belonging, openness, respect, career prospects, organisation, culture, leadership, impact, and flexibility. Using the survey responses, the D&I index was determined for various categories including gender, ethnicity, disability, sexual orientation, company size, offshore vs onshore working and age.

For any company wondering where to begin its D&I journey, the report opens up a cornucopia of possibilities which, if explored, could improve a company’s culture, and enhance business performance.

Amid the various findings, the statistic that really caught my eye was the finding that, of all the categories surveyed, the lowest ranking D&I index scores were for people with a disability and people who are black.

I found this interesting for two reasons. Firstly, it highlighted the danger of viewing any one group as a monolith. According to this survey, black people felt that they had a less positive experience around D&I than people of Asian descent. Specific issues identified for ethnicity included belonging and openness, how they were perceived at work, the extent to which they saw diversity reflected in the leadership of their organisation and the degree of acceptance.

Secondly, it struck me that this survey occurred in the wake of the Black Lives Matter protests that followed the tragic death of George Floyd. When oil and gas workers from ethnic minority backgrounds wanted to know what the industry was doing to respond we pointed to the upcoming survey as a practical step the industry was taking. Looking at this low index for black workers, it is clear that despite the apparent growing openness to discussion around race – many people of African or Caribbean descent still feel unheard.

This is a sobering thought, and one which reiterates the need for companies to continue to create safe spaces in which all employees feel that they can bring their whole selves to work and the need to couple our listening with transformative policy and action.

For disabled people, the issues pertained to access to career and opportunities, company culture and being respected by their organisations. This confirmed the Equality and Human Rights Commission’s report from 2017 which revealed that one in every seven disabled people under the age of 26 has never been in paid employment.

So how do we address these issues?

Two very low scoring questions point to potential solutions. Those questions are: “My organisation closely measures the impact of D&I performance” and “I am involved with D&I initiatives within my company”.

The first question indicates that more needs to be done to understand the impact of initiatives run within companies. It also suggests that we must be prepared to change course if our D&I activities do not result in better representation across the company and a more inclusive company culture.

The second question points to the need for the drive towards racial parity to involve us all in a way akin to our industry’s universal approach to safety. Safety is woven into everything we do; diversity needs a similar approach. Companies can encourage this by ensuring that a commitment to diversity becomes a competency on which employees are appraised.

In the past year in my role as co-founder of AFBE-UK, I have worked with many companies on their Diversity and Inclusion strategy and the very fact that these doors that were once closed are now opening is extremely positive, but the results of the OGUK D&I survey shows that we still have some way to go.

It’s undoubted that the killing of George Floyd in May in Minnesota changed the landscape. People in power – including CEOs and leaders in the energy sector – publicly called for change. This brought ethnic diversity and inclusion firmly to the fore – giving it unprecedented momentum. Progress has since been made.

The date of the survey launch coincided with a guilty of murder verdict being returned in the US on the killing of George Floyd, which for many of us reaffirmed the importance of continuing to take forward this agenda.

However, to paraphrase James Baldwin, the increasing openness reflects the courage to face the facts, but such openness must not be mistaken for real change.

Dr Ollie Folayan is chairman of Aberdeen-based AFBE-UK Scotland, part of London equality, diversity, and inclusion social enterprise AFBE-UK. The organisation supports all young people, particularly those from black and minority ethnic (BME) backgrounds, with career aspirations in science, technology, engineering, and mathematics (STEM).  It holds online events to educate, inform and mentor the next generation in sectors such as energy.