In an interview given to Lubna Bouza from Sky News Arabia, Dr Carole Nakhle, CEO of Crystol Energy, discussed the strategies adopted by oil companies to embrace the energy transition and greening their portfolio. 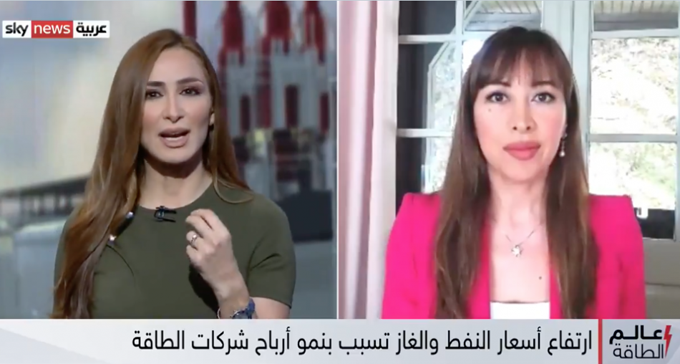 Dr Nakhle stated that oil companies are trying to rebrand themselves as energy companies, covering a wider spectrum of the energy sector. However, their core business is still oil and gas. According to the International Energy Agency (IEA), between 2015 and 2019, less than 1% of the major oil companies’ capital expenditures were targeted towards renewable energy investments. A diversion between European and American oil companies can be clearly identified, with the former showing greater enthusiasm towards green energy projects.

Dr Nakhle added that oil and gas companies support a carbon tax, which is yet to gain a wider appeal given its potential impact on consumers.

Commenting on the IEA’s recommendation to halt exploration of oil and gas beyond 2021, Dr Nakhle pointed to the departure of the IEA’s from its vocal stance over the last few years whereby the agency had warned of investment gap in the oil and gas industry. However, the latest recommendation is one of many ambitious measures for the world to achieve net zero target by 2050.

In the long term, energy demand growth will be driven by developing countries, particularly Asia (China and India). Demand for renewable energy will definitely continue to grow but this may not necessarily be at the expense of fossil fuels. Between 1985 and 2019, the fossil fuels’ share in the world’s electricity mix is almost unchanged, so we should not expect miracles to happen overnight.

Soon after assuming office, United States President Joe Biden signed executive orders and made announcements that led environmentalists to declare that the oil and gas industry would soon be dead and buried. The fight against climate change is one of the Biden-Harris administration’s four key priorities, along with Covid-19, racial equity and the economy.

The new president also brought back the world’s second-largest emitter of carbon dioxide to the Paris climate agreement and suspended new oil and gas drilling permits on federal land. The White House assigned more than $2.2 trillion to green projects and promised to stop “subsidizing” the fossil fuels industry. President Biden also announced a bold reduction of 50 percent in greenhouse gas by 2030 from the 2005 level.

World’s largest producers of energy by source and carbon emitters 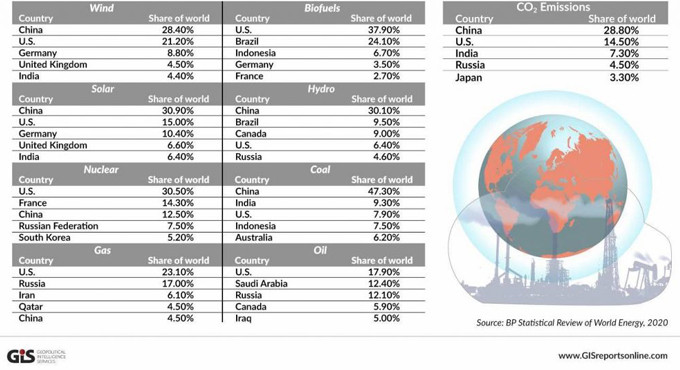 At a glance, the new administration appears much greener than the previous one. However, it is worth considering not only what was said and done, but also what did not happen. Though it is still early to undertake a comprehensive assessment, based on the current rhetoric it is unlikely that the Biden White House will spell the demise of one of the oldest U.S. industries. For fossil fuels to go out of use, they should be made more expensive. After all, it is the relative price of fuels that drives and accelerates substitution. However, to date, no U.S. president – be it a Democrat or Republican – has won an election while promising higher oil and gas prices.

Gasoline prices around the world