An increasingly dynamic low-carbon hydrogen market has seen a deluge of government support, corporate commitments, announced projects and even bystander intrigue over the past 18 months.

We believe this activity amounts to a paradigm shift which will see green hydrogen – hydrogen created from the electrolysis of water using renewable energy – emerge as a key element of the energy transition.

Fill in the form at the top of the page to access an extract from our Q1 2021 Hydrogen Market Tracker or read on for five drivers of green hydrogen’s sudden growth.

The last year has seen a decisive pivot towards decarbonisation globally which is extremely positive for zero-carbon technologies. Recent announcements of net-zero targets from China, Japan, South Korea and Canada, along with the US recommitting to the Paris Agreement, show policy momentum to tackle global warming is now unstoppable.

Green hydrogen is a key beneficiary, with this pivot pushing it to the fore ahead of other methods for producing the gas. In fact, electrolysis-based low-carbon production now makes up 67% of the overall pipeline for hydrogen.

The EU’s Green Recovery Package announced last year specifically earmarked 150 billion euros for green hydrogen. This financial commitment was accompanied by specific targets for electrolyser capacity – 6 GW in the first phase between 2020 and 2024, with 40 GW to be installed by the end of the second phase in 2030.

As a direct result Europe is currently driving growth, representing 79% of the overall low-carbon hydrogen pipeline. However, with 17 countries (including Japan, South Korea and Canada) having announced a hydrogen strategy, roadmap or vision and the global trend towards net-zero targets clear, that dominance is likely to be temporary.

After a pandemic-related dip in Q2 and Q3 2020, investment in low-carbon hydrogen is once again on the up. At least US$4.5 billion was invested in the hydrogen market in the first quarter of 2021 alone, with 55 projects announced.

As Dr. Graham Cooley, CEO of electrolyser manufacturer ITM Power, commented at our recent Power & Renewables Conference: “The capital markets absolutely understand green hydrogen now… we wouldn't be where we are today if we didn't have the backing from the City.”

Incentives are needed in the short term to ensure the industry can scale at the pace required, but the interest is already there. 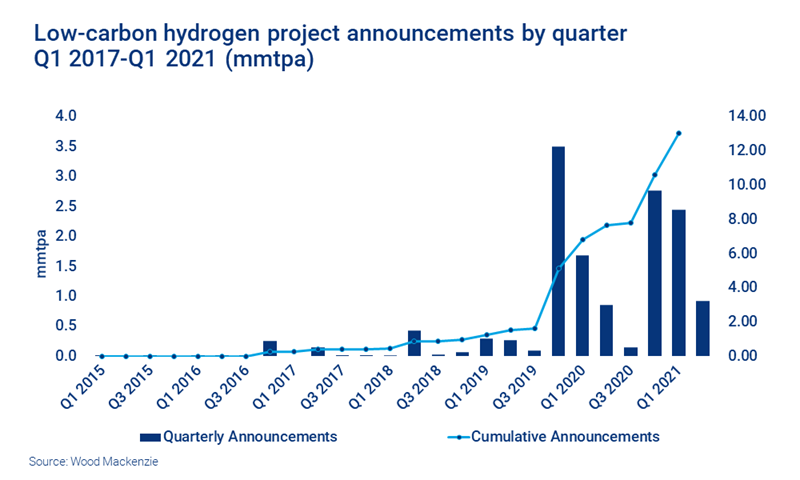 The ability to manufacture ever larger electrolysers that can produce green hydrogen at scale is a key factor in enabling rapid expansion of the sector. (ITM Power’s new manufacturing facility has a capacity of one gigawatt per year, for example.) This also has the usual benefits of scale in terms of bringing down costs. Our own estimates are that green hydrogen will be competitive with fossil fuels by 2028 to 2033, assuming a US$30/MWh power price in 2030.

4. There is growing ability to produce green hydrogen at scale

Until 2019, global estimated electrolyser manufacturing capacity was a mere 200 MW. That has since jumped to 6.3 GW of current announced electrolyser capacity, with 1.3 GW added in Q1 2021 alone and another step up in the announced pipeline.

Of course, this still represents only a small percentage of the almost 1,000 GW of electrolyser capacity needed by 2050 to meet our demand forecasts. However, the exponential rate of growth in manufacturing capacity is clear and likely to continue.

Finally, a key advantage of hydrogen is that it acts as a versatile form of storable energy. So-called ‘power-to-X’ – turning electricity into green hydrogen – is crucial to maximising the efficiency of renewable energy sources like wind and solar, which cannot be easily dialled up and down as required.

As Dr. Cooley pointed out in our discussion, “Electrons are really hard to store, and the best way of storing them is to turn them into a storable product. So, you end up changing the vector from an electron to a molecule – and then being able to store the molecule.”

Hydrogen is also extremely versatile, making it possible not only to decarbonise areas like transport and heating where renewable energy has potential, but also to decarbonise industrial processes which cannot be converted to electricity.

Our Q1 2021 Hydrogen Market Tracker offers detailed analysis of low-carbon hydrogen developments including sector breakdowns, case studies and a wealth of useful statistics.Fill in the form at the top of the page for a complimentary extract that includes: