Destinus hypersonic airplanes combine the most advanced aeronautical and space technologies, reducing the time for intercontinental transport by an order of magnitude. The long-range capabilities, enabled by hydrogen as a fuel, will open new flight paths for cargo and passenger transportation anywhere on Earth. 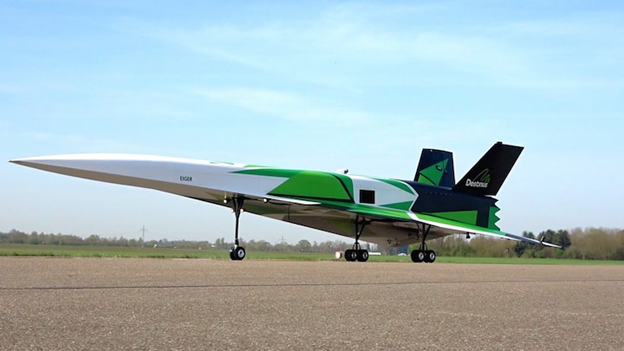 Destinus’ first prototype, Jungfrau, is reaching new heights. While Eiger (the company's second and larger prototype) is in full preparation for its next flight campaign, Jungfrau has been reintroduced to the sky to collect additional information and test out new equipment, in order to drive future developments. Last week, the enhanced Jungfrau cruised over an airfield in Germany with upgraded sensors and hardware, kicking off a new series of test campaigns that will carry out over the summer.

This is essential as, after all, every aircraft requires to take off, land and fly in a subsonic regime.

In contrast with conventional subsonic aircrafts, Jungfrau is tailless with a low delta wing configuration and negative dihedral. Due to  shock waves  at hypersonic speeds, the delta wing has a high sweep angle and a very low aspect ratio. In contrast, subsonic aircraft usually consist of high aspect ratio wings with positive dihedral and a small sweep angle. The low aspect ratio and negative dihedral enables efficient wave riding in hypersonics (the art of surfing on shock waves), but it is unstable and inefficient at low speeds.

It is very important to study the stability, maneuverability, and balancing of the aircraft in a subsonic regime before attempting to break the sound barrier. The combination of computer simulations and flight testing is necessary to understand the aircraft and to make the optimum developmental leaps. To this end, flying Jungfrau has been a fantastic source of data to calibrate predictive models to describe the low-speed behaviour of the aircraft.