Sustaining production from existing infrastructure remains the key driver for North Sea exploration but five years of drilling has only replaced 15% of production. There is ongoing appetite for high impact drilling, despite a success rate of only 12% for this type of exploration in the period.

Between 2015 and 2019, there were 124 exploration wells drilled in the UK and Norway North Sea, delivering 1,060 mmboe commercial resources from 29 discoveries and replacing 15% of reserves produced over the period. Total exploration drilling spend of US$5.2 billion gives a drilling finding cost of US$4.85/boe (Figures 1 and 2).

Sustaining production from existing infrastructure remains the key driver for North Sea exploration. There were 90 infrastructure-led exploration (ILX) wells which delivered 26 discoveries between 2015 and 2019 at a CSR of 29%. ILX drilling added around 750 mmboe to existing production hubs which is equivalent to about six months of production over the period. In contrast, non-ILX wells delivered only three commercial discoveries at a 9% CSR (Figure 3), only one of which is large enough post-drill to be a standalone development. 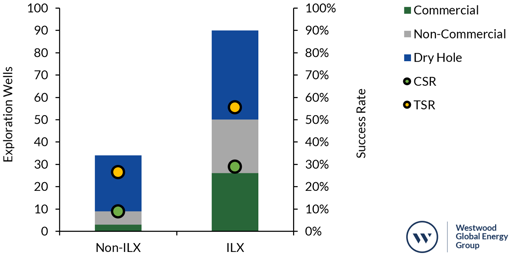 A total of 25 high impact (HI) prospects, where company reported pre-drill resources were ≥100 mmboe, were drilled in the North Sea between 2015 and 2019, including 13 in 2019. Five of these 25 wells tested frontier plays in which a commercial discovery had yet to be made. Only one of these 25 wells, Aker BP’s Liatårnet well in Norway, made a >100 mmboe discovery and was also the only new play opening well. CNOOC’s Glengorm well in the UK was the only other discovery >100 mmboe, however this was not a HI prospect pre-drill. Glengorm is the only new potential hub that has emerged from exploration since 2015. Resources in both discoveries are still uncertain and subject to confirmation by appraisal drilling. 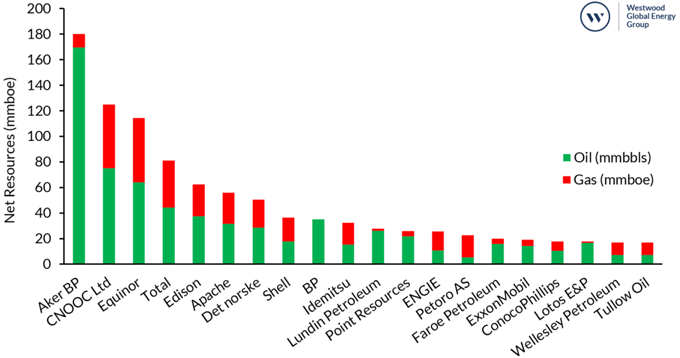 The five years reviewed in this study were framed by two oil price crashes, which came in late 2014 and early 2020. Exploration performance has improved since 2015 however overall success rates remain mediocre and overall finding costs are high. An increase in high impact and frontier drilling in the last five years shows companies still have an appetite for risk, despite limited success in these wells. The planned pool of wells for the next 18 months includes 12 high impact wells, suggesting risk appetite remains despite current low oil prices.