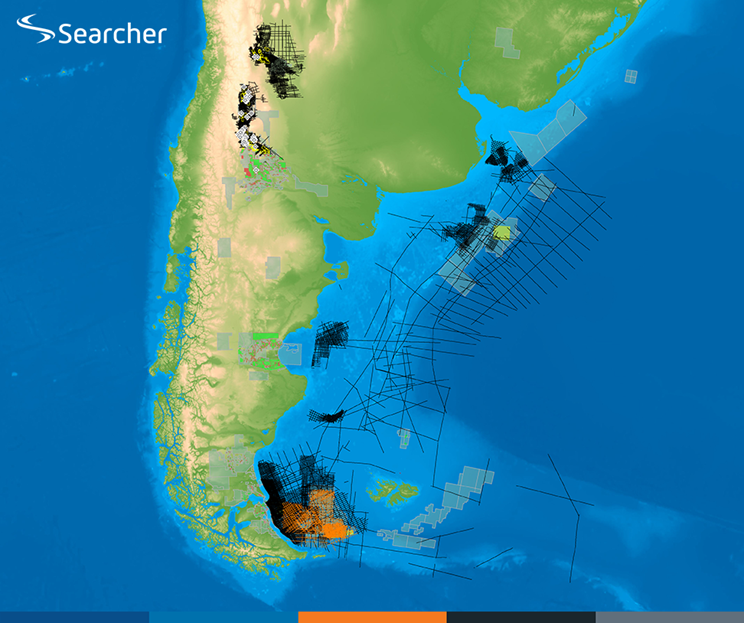 The Austral Basin in southern Argentina has in the past been the focus for offshore exploration with up to 2 billion barrels of oil equivalent discovered by 51 exploratory wells. To the east of the Austral Basin, over the Rio Chico High, lies the West Malvinas Basin, formed during the late Triassic/Early Jurassic separation of Antarctica and South America. Only 20 exploration wells have been drilled, with discoveries made at Calamar-1, Salmon-1 and Salmon-2 and oil shows encountered within several other wells.

Offshore exploration activity was revived through the first offshore bid round campaign, which was largely supported by a regional 2D seismic dataset which led to a better understanding of the basin. This was followed by applications for licences by various international and domestic loil companies and ended in the successful award of several blocks, mainly in the southern part of the basin. A regional evaluation exercise was carried out to rank the blocks offered in the West Malvinas basin, integrating the reprocessed 2D seismic data available at the time, together with conditioned well logs and a full petroleum systems evaluation.

In this study, it was found that understanding the lateral distribution of lacustrine shales within the syn-rift grabens, is key to de-risking the presence, distribution and quality of source rock in the Malvinas Basin. Data quality of reprocessed 2D seismic data is critical for the interpretation below the Base Cretaceous Unconformity, which at the same time enables interpretation of the Jurassic source rock section. The impressive results obtained in imaging the deeper section with the latest reprocessing phase, have revealed additional syn-rift grabens in the north of the basin, where acreage remained open after the round. The view on prospectivity in this area has shifted, based on indications of a thicker sedimentary section with access to a potential good quality, oil-prone lacustrine source rock. The area is therefore deemed to have hydrocarbon potential that is worth re-evaluating, in light of the new reprocessed seismic data.

The province of Mendoza has the first oil wells, drilled in 1887 by the Mendocina Petroleum Company, in  the northern  Cuyo Basin. Originating as a Triassic rift, its sedimentary section evolved from proximal fan systems to river and lake deposits, with a marked pyroclastic influence, which has influenced reservoir properties. The Jurassic river deposits of the Barrancas Fm are associated with the largest hydrocarbon accumulations. Andean compression reactivated rift faults, generating hydrocarbon traps. Reservoirs are mainly conventional with some production from the tuffaceous and andesitic levels of the Cabras Fm. The source rock is the lacustrine Cacheuta Fm, kerogen Type I, COT 3 to 10%, and thicknesses of 50 to 400 m, although its maturation level is low on a regional scale, it reaches its maximum generation capacity in the Tupungato area, in the west of the basin. It has future potential as an unconventional reservoir. 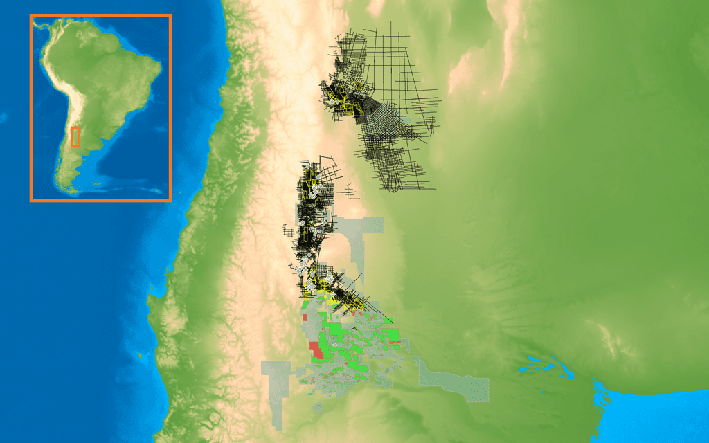 The northern part of the Neuquen Basin is located in the south of the province. The first wells (Cerro Alquitrán) date back to the beginning of the last century. They were drilled in the vicinity of oil seeps associated with andesitic intrusive bodies, attracting the attention of well-known specialists such as Frederic H. Lahee who visited the region in 1923. The sedimentary section began in a Triassic rift and continued with Jurassic marine and Cretaceous backarc deposits, undergoing intense compressional tectonics that favored the development of fractured reservoirs of the Mendoza Gr. (calcareous levels of the Agrio and Chachao formations). Hydrocarbon accumulations in Tertiary igneous bodies that intruded the Mendoza Gr. have also been important. The continental sandstones of the Neuquén Group were one of the last conventional reservoirs discovered. In terms of unconventional reservoirs the Vaca Muerta (kerogen type II and COT 2-7%) and Agrio (Kerogen type  I and  COT  0-2%) formations have great potential. The potential of the first has been proven by several wells and its location in the fold and thrust belt provides interesting additional potential.

The Offshore Argentina OpenSeis 2D & 3D Reprocessing consists of both 2D and 3D vintage seismic data which has been rectified with Searcher’s proprietary OpenSeis post-stack reprocessing method. The post-stack reprocessing rectifies navigation, metadata, amplitude, phase and time to create a contiguous database that can be easily loaded into any interpretation software. The data package comprises of approximately 105,000 km of 2D and 4,300 sq km of 3D seismic data along the coast of Argentina.

The regional Argentina OpenSeis 2D and 3D provides a much-improved, consistent, regional grid covering the offshore basins of Argentina, with multiple vintages tying as many wells, leads and prospects as possible.

The Argentina OpenSeis 2D and 3D Seismic Reprocessing is loaded and hosted on Searcher’s multi-client platform, sAIsmic, for consistent and instant online access for explorers. Saismic is a transformative web-based platform that offers seismic Data as a Service (DaaS) with support for deep learning and advanced analytics. The Saismic GIS web portal has traditional functionalities of ingestion, online viewing and export to SEGY functions and offers a global collection of rectified open-file seismic data.