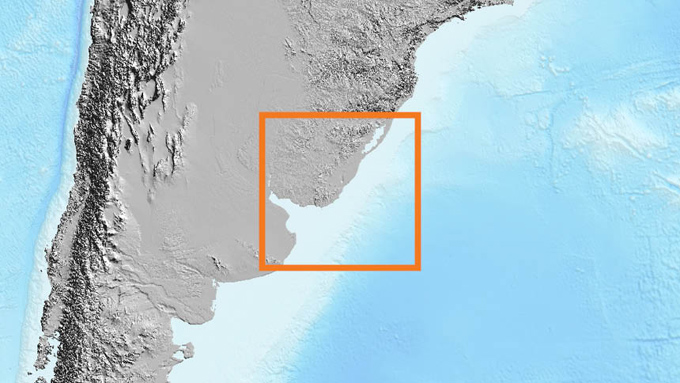 The Punta del Este basin develops in the western part of the offshore of Uruguay near the border with Argentina. It was formed by a failed rift structure in the Late Jurassic, producing a northwest-southeast (NW–SE) fault trend.

The Pelotas basin develops in the eastern part of the offshore of Uruguay and extends through several kilometers into offshore Brazil. It was formed during the Early Cretaceous with the subsequent opening of the Atlantic Ocean, forming a NE–SW fault trend.

New regional horizon interpretation will delineate the variable structural framework and timing of faulting between these basins, which resulted in a varied depositional history during the Jurassic, Cretaceous, and Cenozoic.

The area offers an abundance of exploration opportunities. Numerous clastic-channel and fan systems, plus carbonate build-ups form stacked plays throughout the Paleozoic to Tertiary section. Most of these plays have yet to be tested. Fluid inclusions of oil and gas, gas chimneys and BSRs identified offshore indicate a working petroleum system with predicted source rock intervals in the Paleozoic, Jurassic, and Cretaceous.