Industry and academia unite to launch a new initiative to advance the role of geothermal energy in the energy transition with the newly formed Geothermal Energy Advancement Association.

Jon Gluyas, Professor at Durham University and Director of the Durham Energy Institute at Durham University, and Chris Sladen, whose decades of work in the energy and education sectors have been recognised by the UK Government with both an MBE and CBE, will be President and Board Chair of the new Association respectively.

“We are excited and delighted to take this important step to create more sustainable, secure, clean and affordable energy availability world-wide by advancing knowledge and support for the development of geothermal energy.” Gluyas said.

“The rapid uptake of geothermal energy can play a leading role in a cleaner, decarbonized world while advancing economic and social goals and generating investment, jobs and growth.” said Sladen. “We very much look forward to representing this important field at this critical point in time.”

The Geothermal Energy Advancement Association (GEAA) advocates increased investment in geothermal energy and increased awareness of this sustainable source for near zero-carbon power, heat, and hot water. The Association is a not-for-profit organisation offering leadership, dialogue, and information in the energy transition debate, supporting the role of geothermal in transitioning to a world that will use less petroleum specifically and fossil fuels in general. GEAA officially takes effect April 14.

Geothermal energy is a constant energy source present everywhere worldwide, occurring naturally underground, on land “beneath our feet” and at sea, below the seabed. Geothermal energy can be accessed through the use of wells at various depths, providing a reliable, year-round, 24/7, emissions and pollution-free baseload for power generation and heating, both for on-grid and off-grid projects.

Geothermal energy provides a stable supply that is not subject to the vagaries of weather conditions. It does not involve significant carbon emissions or pollution or consume large amounts of rare minerals. It often can be configured financially as stand-alone projects and offers commercial viability out of the gate.

The new Association promotes awareness and consideration of geothermal energy as an independent energy and heat source. It also advocates for policy and legal frameworks that will accelerate the use of geothermal energy on a global basis. With increased investment, a wider understanding of how geothermal energy can be used, and better knowledge of rapidly evolving geothermal technologies, this ubiquitous energy resource can become a key part of a clean energy future used in all countries and communities. 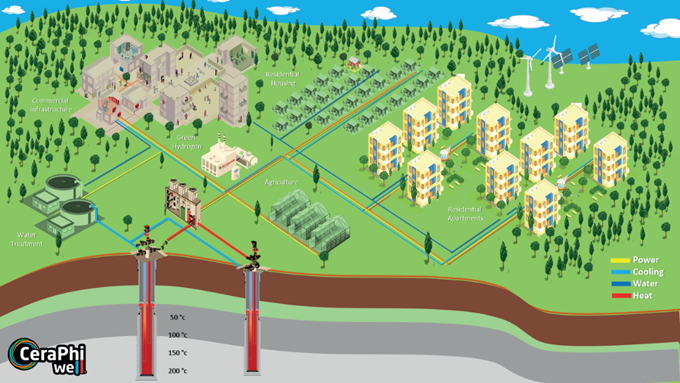 Jon Gluyas. Jon is Director of the Durham Energy Institute at Durham University in northeast England. He is also the University lead on UK Industrial Strategy and is Professor of Geo-energy, Carbon Capture & Storage. Most of Jon’s career spanning 40 years has been in developing expertise in geo-energy delivery, technology, and research. In geothermal energy this includes the drilling of deep research wells. Also, his expertise covers petroleum development and production, carbon capture and storage and leading a team which developed and successfully tested a model for helium exploration, delivering the first new helium province in decades. In the past, Jon has cofounded and raised capital for energy companies and technology-driven companies and his work is well-known for transcending the industry/academia boundaries. In geothermal research, Durham University has become a national leader. Jon’s contribution to science has been recognised through many awards, including the Geological Society of London, which awarded him the Aberconway Medal in 2000 for excellence in the application of geoscience to industry.

Chris Sladen. Chris is an advocate for better energy solutions than the ones we have used so far! Chris is well known for laying a framework for co-investment between public and private sector energy companies, whilst explaining the different elements of project, contract, and country risk. He has a track record of helping governments and regulators to optimise private and co-investment, guiding the next steps for energy ventures, energy transition and climate strategies. Chris has a unique global experience having worked in over 40 countries where he gained direct experience on hundreds of wells particularly in the petroleum sector where he worked for many years. Chris’ experience includes on the Boards of companies, subsidiaries, business chambers and organisations, both in executive and non-executive roles. He is a non-resident fellow at the Institute of Americas focusing on low carbon policies and energy technologies, particularly geothermal and hydrogen. He has published extensively over five decades on energy matters and trends, technology, climatic signals in the rock record and the transformation of minerals and fluids in the subsurface. Chris’s contributions to the energy and education sectors have been recognised by the UK Government with both an MBE and CBE.