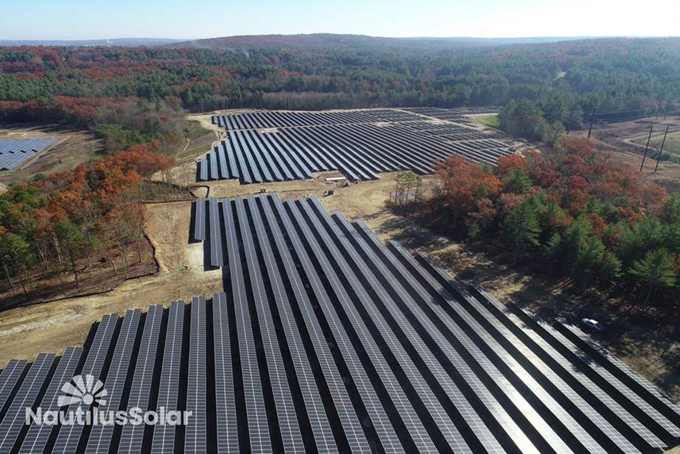 Nautilus Solar Energy and TurningPoint Energy (“TPE”) announce the King community solar project located in North Smithfield, Rhode Island has reached mechanical completion and will be fully operational in July. The 15.68 MWdc (12.44 MWac) project, made of two solar arrays, collectively is represent the largest community solar project in Rhode Island and will provide more than 3,000 Rhode Island National Grid customers with energy savings from subscribing to the project. The project is owned and operated by Nautilus and originally developed by TPE. Former Governor and current US Secretary of Commerce Gina Raimondo attending the groundbreaking for the project in November 2019. The project required significant collaboration between Nautilus, TPE, Town of North Smithfield, the Environmental Protection Agency (EPA), and the Rhode Island Department of Environmental Management (RIDEM) as the project lies adjacent to the Landfill & Resource Recovery, Inc superfund site, which is currently undergoing a long-term remedial response under the oversight of the EPA.

“The community solar pilot program in Rhode Island presents a unique opportunity for residential customers to participate in the clean energy economy and directly save money on their utility bills,” said Jim Rice, co-CEO and co-Founder of Nautilus Solar.  “We are hopeful that the legislature and new administration continue to build on this momentum by expanding the pilot program to allow for more projects like King to be developed in the State,” added Jeffrey Cheng, President of Nautilus Solar.

“The King solar project has been a well-received project from inception and represents the importance of partnership between industry and the local community in identifying prime siting targets. While not all projects can be located on previously disturbed land, this project was particularly rewarding due to the environmental contamination and limited alternative uses,” said Jared Schoch of TurningPoint Energy.

The King solar project is part of the State of Rhode Island’s Community Net Metering Solar Pilot Program which has helped to create hundreds of temporary jobs and provide savings to thousands of Rhode Island residents that have subscribed to the project.