President of LUKOIL Vagit Alekperov and the Governor of Nizhny Novgorod region Gleb Nikitin had a meeting in Moscow today. They discussed current progress on the ongoing projects and prospects for the future development of cooperation between the company and the region. 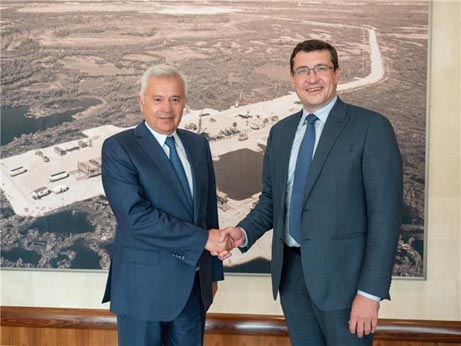 "LUKOIL is one of the pivotal enterprises in the Nizhny Novgorod region. It is of paramount importance that the company proceeds with its major investment projects such as construction of the Petroleum Residue Recycling Facility. The launch of the facility will create new jobs for the locals," said Gleb Nikitin.

Construction of the Petroleum Residue Recycling Facility at LUKOIL's wholly owned refinery of LUKOIL-Nizhegorodnefteorgsintez began in 2018. Apart from a delayed coker, the complex features a diesel hydrotreater, a gas fractionator, hydrogen and sulfur production units, as well as infrastructure facilities. The facility's total annual feed rate amounts to 2.1 million tonnes.